Skip to content
SHOWFLAT NOW OPEN. VIEWING BY APPOINTMENT ONLY

The three-bedroom show unit at Clavon.

The bathroom of the five-bedroom show unit at Clavon.

“We saw a healthy interest from buyers given the strong demand for viewings during the first weekend of Clavon’s preview. Our appointments were full on Saturday, and to accommodate the demand for timeslots, we extended the operating hours of the sales gallery by two hours on Sunday,” says Jesline Goh, UOL’s chief investment and asset officer.

SINGAPORE (EDGEPROP) – Singapore-listed UOL Group and its joint-venture partner, UOL subsidiary, United Industrial Corp (UIC), previewed their new project Clavon on Nov 28. The 640-unit, 99-year leasehold condo is scheduled for launch two weeks later on Dec 12.
“We saw a healthy interest from buyers given the strong demand for viewings during the first weekend of Clavon’s preview. Our appointments were full on Saturday, and to accommodate the demand for timeslots, we extended the operating hours of the sales gallery by two hours on Sunday,” says Jesline Goh, UOL’s chief investment and asset officer Clavon, the latest residential project by UOL Group, incorporates design elements from other UOL projects like The Tre Ver and Principal Garden. (Picture: Samuel Isaac Chua/The Edge Singapore)
Clavon is located on Clementi Avenue 1, near The Clement Canopy, which was also jointly developed by UOL and UIC. The 505-unit, 99-year leasehold condo, also located on Clementi Avenue 1, was fully sold and completed last year.
Following the success of the launch of The Clement Canopy, UOL and UIC bid for and won the 178,064 sq ft site nearby for $491.3 million in July 2019. And it is where the upcoming Clavon is situated.
The site is close to schools and tertiary institutions in the Kent Ridge area, including the National University of Singapore (NUS), Yale-NUS College Campus, NUS High School of Mathematics and Science, as well as Nan Hua Secondary School. 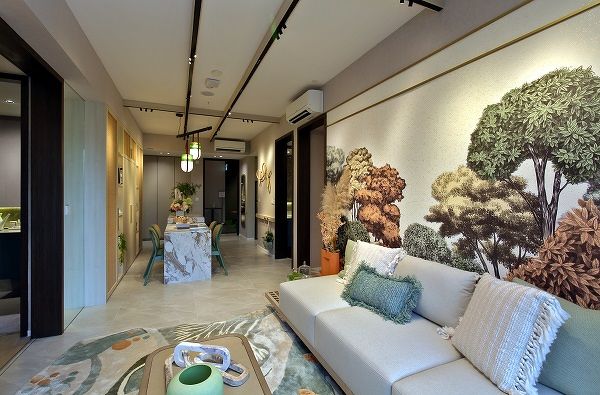 The two-bedroom unit features a slightly wider dining area that can do double duty as a home office. (Pictures: Samuel Isaac Chua/The Edge Singapore)
“The site in Clementi is at a very sought-after location, given its proximity to the educational hub at Kent Ridge. From the good sales performance at The Clement Canopy and other residential developments in the area, we know that this area is now seen as an established residential locale,” says UOL Group chief executive Liam Wee Sin.
The design for Clavon was inspired by UOL’s other recent projects, such as the 663-unit Principal Garden in Alexandra and The Tre Ver, a new 729-unit project in Potong Pasir, which is fully sold just over two years after its launch.

Three-bedroom units will feature a flexi-use room beside the bedroom corridor. (Pictures: Samuel Isaac Chua/The Edge Singapore)
“The terrain here gave us the opportunity to create a design that is different,” says Liam. “The sloping terrain is almost similar to what we have at The Tre Ver, which slopes down towards the river. At the same time, we also drew inspiration from Principal Garden, which capitalises on the relatively large space against a smaller building footprint to create a resort-like feel.”
Don’t miss out to check out the hottest new launch condo and new landed property in Singapore
These attributes are clearly visible at Clavon, which features two 37-storey residential towers arranged in a north-south orientation. “We believe good buildings add not only value to the property but also to the quality of life. In every UOL project, we aim to deliver a strong product through good design, ecologically driven landscaping, sustainability and emphasis on community,” says Liam.

Clavon comprises a mix of one- to five-bedroom units ranging from 527 sq ft to 1,690 sq ft. One- and two-bedroom units make up 356 units or 56% of the total. Sizes range from 527 sq ft to 764 sq ft.
“Given the experience from the Covid-19 pandemic, we believe that more buyers will be looking for homes that provide them with a little bit more living space compared to pre-Covid times,” says Liam. He reckons the extra space will be useful for those working from home.
One-bedroom units feature a study niche, while two-bedroom units come with a slightly wider dining area that can do double duty as a home office. Three-bedroom units come with a flexi-use room that can serve as a study. Liam sees flexibility of space use becoming increasingly appealing to home buyers today. 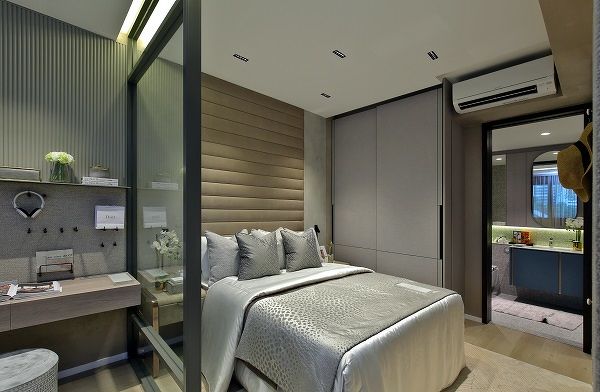 The one-bedroom unit features a study niche beside the bedroom that can be used as a workspace. (Picture: Samuel Isaac Chua/The Edge Singapore)
The condo will also feature a gym and co-working spaces within its clubhouse, a 50m infinity pool on the ground floor, and children’s play areas.
“There is a lot of thought on how we, as property developers, can maximise spaces, and how we can incorporate flexi spaces into efficient layouts, thus creating useful spaces where home and work can co-exist,” he says.

Prices of units at Clavon will start from $1,475 psf. According to Jesline Goh, UOL’s chief investment and asset officer, the launch of Clavon comes as the group’s other residential projects in Singapore are nearly fully sold.
These include projects such as The Tre Ver, which is fully sold, and Amber 45 on Amber Road, where only five of the 139 units are still available. At Avenue South Residence on Silat Avenue, close to 600 out of the 1,074 units in the development have been taken up. Given the travel restrictions still in place around the world, most of the residential real estate demand in Singapore is likely to come from local buyers and given Clavon’s location, mainly from HDB upgraders, notes Liam.
“Based on the current ABSD [additional buyer’s stamp duty] regime, HDB owners would need to pay a 12% ABSD within 14 days of signing the sale and purchase agreement when they commit to a private property — if they have not sold their existing home. This is a substantial upfront cash payment,” says Liam.
He urges the government to consider extending the same ABSD remission period for executive condominium (EC) buyers to those buying private condo as well. Currently, HDB upgraders have to sell their flats within six months of purchasing a private property in order to be entitled to the ABSD remission. For those buying ECs, they are given six months to sell their HDB flat from the time they collect the keys to their new EC. Hence, Liam is proposing that HDB upgraders be accorded the same six-month period to sell their HDB flat from the time they collect the keys to their private condo.
This is not the first time such a suggestion has been voiced by an industry leader this year. In September, Chia Ngiang Hong, president of the Real Estate Developers’ Association (Redas), also urged the government to consider allowing first-time HDB upgraders buying a private property to be able to defer payment of the ABSD.
According to Liam, such a move would be “logical in many aspects”. He adds: “Besides easing cash flow problems, this also addresses other considerations that buyers have to contend with, such as the logistics of finding an interim accommodation while waiting for their new private property to be completed.”
If implemented, this tweak in the ABSD policy would bring it in line with what is already in place for EC buyers, and would help genuine HDB upgraders ease the transition into private property ownership, says Liam.
Continue To View : UOL’s next-gen condos designed with post-Covid lifestyle in mind »

Fill up the form on the right and get a copy of Price, E-Brochure, and Latest Updates!